While generally I can trick H about many things, she’s getting smarter. Of late, she has been writing lots of letters. When I say lots, I mean LOTS.

I ask her what they say, and she tells me “they’re private”.

So I say “aaahh but you can tell mummy!” and hope she might weaken as she “loves her mummy so so much” but no. “It’s private.” she reminds me.

So I accept this, and watch her go and hide the letter. Except it’s being hidden in the bookcase. The bookcase which has several of her books in it.

So I wait until she’s gone to get ready for bed, as she doesn’t come back downstairs at this time.

Surely it can’t be that difficult to find a private letter to Santa Claus, can it? It would appear so. My child is good at hiding places. Must get that from me… what with all the things us parents have to lie about to keep up the magic.

Someone suggested maybe she’s testing Santa, to see if he really exists. As if Shaun and I can’t read the letters, then he really must. But of course, we’d find the letters and know what she was asking him for. But then by looking for the letters (and potentially finding them) are we disrespecting her request for privacy? So we have to keep ANOTHER secret from her, that we’re having to lie about finding a letter to keep up the lie about Santa?

I know she’ll keep believing in the Tooth Fairy as she gains money from that one. I know she’ll probably question Santa Claus soon as other children in her class have older siblings and you can guarantee they’ll blab. I’ve had to tell her we pay Santa Claus back, so she can’t just choose the most expensive version of Super Mario Maker and think it’s okay. (and also I’m thinking this is quite a good family present rather than just for H, as I’ll play it as much as she is likely to – although the limited box, without the game looks awesome – for me).

But right now I can’t find the letter. Although one Facebook friend said I should suggest that I read the letter so I don’t buy her the same thing as Santa. Although knowing H she’ll just suggest we give the duplicate toy to one of her friends.

One thing I do have under control is wrapping paper. Last year H spotted that Santa had used the same paper as we have “oh ho ho ho ohhhh” I bluffed “what a coincidence” and changed the subject. This year I’ve bought a roll and hidden it under the stairs. This means she’ll probably find the roll on Christmas Eve or something – it’s inevitable.

Tuesday came, and with it our third Santa visit. Only one more to go.. back in my day it was one Santa visit (at the Co-Op in York, with a magical sleigh ride, where you really thought you were travelling through the trees, until you got a bit older and realised that the ceiling wasn’t moving) – H has so many Santas it’s getting a bit silly.

Painshill Park was the one we chose as the special one – I’ve done a review over at Mum Friendly which goes into the more practical stuff.

All day we rehearsed what Santa was going to say, and then an episode of Meg & Mog (which I only just realised thanks to my sister is on every day on Tiny Pop) featured a baby octopus. So no longer was H wanting ‘a doctor’, she now wants ‘a baby octopus’.

Standing in front of Santa, on his sleigh in the grotto, it was fab, utterly utterly fab – and she said those words. Santa looked at me as if to say “Did she really say that?!” and I clarified that yes, H would love a baby octopus. He handed H a present, to which she said “is this a baby octopus?” looking hopeful – just to have it quashed again by being told unfortunately no, it wasn’t.

As we made our way out of the Grotto which was beautifully lit and cold in a kind of special way (not freezing, just in a kind of you’re-warm-inside sort of way), we headed back to collect the buggy and headed out of the park, seeing it in a light you’d never get to see on a regular day of the week. Aaaaah it was lovely.

On asking H which was her favourite bit of the day (Thank you Dora The Explorer for introducing this kind of questioning to our lives), she proudly announced “Father Christmas”. Phew.

Painshill is sold out for this year, you need to get in quite early, and it’s a good turnaround, but definitely worth doing. 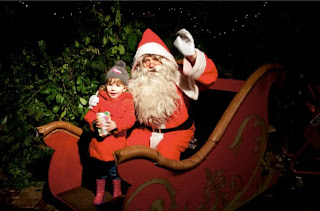 This is a re-write.

This morning we had our last Dramabuds class for this term, the theme was ‘The Night Before Christmas’, Santa was ill, so the kids helped the elf make presents. Incredibly, H joined in from the start and was so confident and happy and enjoyed herself I felt like the proudest mum – she’s really coming out of her shell.

We had to ‘climb down the chimney’ (ie go under the parachute and sing a song), and all of a sudden there was a “HO HO HO!” – H looked a bit “Eh?! He’s here again?!” and excitedly clambered out of it – “HELLO SANTA!” she shouted, and all the kids obediently sat down waiting for their name to be called. I just got a bit teary instead (this bodes well for Tuesday at Painshill…)

H’s name wasn’t actually called, I had to point to her head when the last few hadn’t been up, but she didn’t mind – and walked up to Santa to continue the conversation and remind “him” who she was from the other day when they met “I have Peppa Pig on!” she announced, and pointed to her socks too, as she’d got those in her secret Santa package…  like Santa remembered. Fortunately she didn’t notice or care and just wanted to talk to Santa. Santa got a big “GOODBYE!!!!!” but no cuddle this time.

We got home and suddenly a harsh realisation hit H. Penny wasn’t in the room! She missed Santa! (Penny is one of the teachers, and of course if you need it spelling out, was Santa). “Oh, Penny missed Santa! She was in the toilet! She didn’t get a present. Silly Penny!” She has in fact been talking about this ALL day, and I fully expect this to go on for the next few months in her random toddler thought brain.

I like the fact I can get away with this lie for the forseeable future. PHEW.

H had her first 2011 meeting with Santa today. She waved at him, shouted “HELLO SANTA” and was exceedingly confident and forward with him. When her name was called to come and get her present she was too excited to wait (she’d previously said she wanted to sit with me), and pretty much ran and sat down next to him, then looked a bit “where’s mummy?” about it all.

She let Santa know she wanted “a doctor” for Christmas, and that was it really, it was lovely, and a get together of some friends, all kindly hosted by Claire. Claire’s dad was Santa, and he was great!

All the kids had their santa moment, and right at the end as he was leaving the room I said to H she should say bye to him, so she yelled “BYE SANTA!” and went over to give him a hug. Aaaaaawww.