After having weeks of being not-quite-right, normal life is kicking back in again – I’m going for long(ish) walks with H again, leaving Shaun to study. Earlier today we finally sat down and watched Dora’s Ballet Adventure which I’ve just posted a review of at Mum Friendly.

Fortunately H loved it, so I think she’s ready for more Dora – there’s a character which she always shouts at, but I’ve never watched any with her so don’t know who it is – although this shouting at thing must be some kind of toddler phase, as we’re in the park and she’ll yell out “LITTLE BOY! WHAT ARE YOU DOING ON MY SLIDE!” in a quite bossy way. Obviously I’ve no idea where on earth she gets that from. Ahem.

We’ve been teaching H her full name now too, and she’s quite excited by the fact she has four names, and was repeating them quite a lot earlier today, and saying “woww! four names!” a lot too…

Earlier today, H’s new friend M came over with her mum and dad to make cookies – and H behaved pretty well, and apologised when she needed to as well. The cookies were pretty good too – although in retrospect I probably should have eaten something a bit more substantial as later on I almost blacked out in the supermarket. Whoops. There’s another nightmare almost living itself out there. 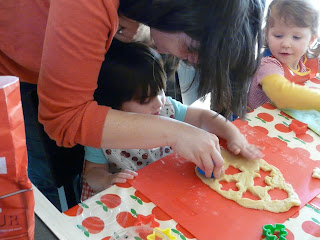 We’ve started doing the sensible thing, I found out roughly what time H has her nappy changed at nursery, and we’ve had a few successful sitting on the potty incidents at home now which is fantastic – we’re so proud of her. We’ve just got to be stricter with ourselves now, and make sure we keep to it – but she’s a proper proud little girl when she goes.. so much so she’s mimicking things (like the other day) – and sat Tiny Tears on her potty and praised her using almost exactly the same words I use when she does it. Yikes.

Back when she was a newborn my sister bought us some BBC books (Books For Babies), small ones with simple rhymes in it – and since I’ve had my back troubles we’ve read one book a few times – probably over the course of a week? Tonight H was able to recite the entire book, turning each page at the right point and even saying “I wouldn’t let them hide” while shaking her head – blimey. We’ve also dragged an old book, ‘Rabbit’s Day’ back out and read that every single night… even H is getting a bit bored (but still asks me to read it).

Next door has a newborn. We’ve not heard a peep from him overnight, despite them saying he’s crying a bit – and even better, they’ve not heard a peep from us when H has one of her screaming fits in the middle of the night… it’s little things like that which give you one less worry as a parent – I’d often be concerned about the neighbours in our last house (but then again, one side were smokers and the smoke came in under the floorboards) and keeping them awake – so this is good news – sounds like we must be pretty well soundproofed here!!

This site uses Akismet to reduce spam. Learn how your comment data is processed.