This is what’s elbowing me most of the day, it would appear 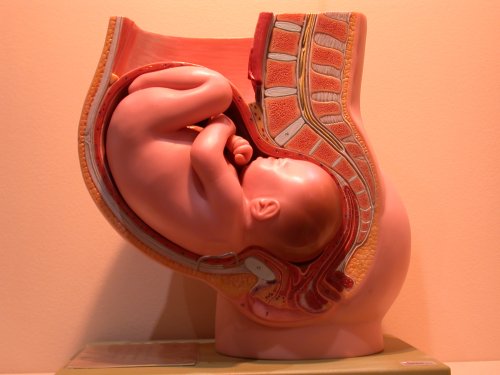 since I last updated properly, mainly due to time, and aches and pains, so let’s make this one big update.

Right now I’m having the back pains from hell – they’re at the point (as of last night), where they’re preventing me from sleeping properly. Which is extremely annoying. However, I feel fine today, and I’ll just go into work early, then if I need to leave early, I can. Nothing will shift these pains, it’s my new shift of gravity (aka Madam), and trying to align my pelvis with my shoulders (learnt that yesterday in my antenatal class). Even my big long pregnancy pillow didn’t help that much. Oh pain, go away.

Today Madam’s pushchair should arrive – the black and coffee Maclaren Techno, and tomorrow the baby monitor should arrive from Amazon. See, we’re spending wisely now. Actually, I say that, but I still spent money on clothes for her (god, I hope she’s a “her” – we should find out for definite tomorrow, when we have our 4D scan). Anyway, not long now. People need clothes, anyway.

(she already has many)

I’m getting many moments of great happiness by her kicking me, in what feels like a game of football, minus the ball. Some nights it’s literally “boom-boom-boom-boom-boom” repeated for ages, of course, I call Shaun, and she immediately stops.

The biggest downer of all, which I’d like to think I’ve adjusted to, having now known a week, is Gestational Diabetes. In other words, my body can’t deal with the extra sugar, so I’m classed as a diabetic for the forseeable future. While I was devastated (it’s hard enough dealing with all the other stuff, without then having to calorie-count and watch what you eat), I’m resigned to it now, and actually, my diet hasn’t changed that much. I’m controlling it by diet right now, which seems to be working fine. I’ve had a couple of high readings (lots of little bruise like marks on my fingers now, too), but have put them down to the food I’ve eaten at the time (Soy Sauce! I mean… this is how restrictive you have to be). Anyway, I’m over crying about it, and feeling sorry for myself, I was allowed that bit of time – I felt like I’d horribly let down the baby by not being able to protect her adequately, and now I am able, even if it means I’ve got to make a note when I last ate, to be able to do the blood test 2 hours later.

It looks like all of Shaun’s family are coming over in September – well, not all of them, but most of them, to meet Madam! So that’s going to be hectic, but nice. Actually, it will be completely hectic, because chances are Madam will make a late entrance. I’d much prefer an August baby though. I’m impatient enough as it is, and god, if this backache is still happening, I may well be a complete wreck.

One plus side fo the backaches, fitflops. I bought a pair when they were launched a couple of years ago (when they were 60 quid- they’re half that now. God.), and they come out every summer, when I remember I’ve got them. Tried them last night, and oh, the pain went. I could walk normally, without being hunched over. So I’m going to use those at work, and hopefully it’ll help my posture. I did a glowing testimonial on their website, actually, it was so gushy and glowy that I’m almost embarrassed about it. Still, it truly helped for a short while last night and will hopefully help today. I suspect it’s probably so OTT that they wont actually publish it. Mind, I then had a dream that baby brain meant I said I was “drunk” rather than “pregnant” in the review. Whoops.

SO yes, tomorrow, the 4D scan. Hopefully we’ll have 100% confirmation that Madam is indeed a madam, so everyone can start calling her “she” rather than “it” or “he/she” as my mum prefers, then it’s just which girl name she looks like the most (we have three, though have used one of them more than others).

I think that’s about it, anyway. In a sort of long, drawn out nutshell.