Last night H amazed me once again by being able to recite Put Me in the Zoo pretty much perfectly, give or take a few toddler-isms. I was impressed – it’s not a difficult book, but it’s also not short. It was also kind of funny how she repeated some of the ways I read it to her… that toddler brain is way too bright.

We spent most of yesterday staying at home – and decided the rash was just a cold, so put on plenty of E45 and Vaseline, which seemed to help hugely.

We read soooo many books yesterday, so so many. We have so many anyway, but we read a lot. We took breaks from reading by playing or watching some tv – H seems to like the Rugrats, and that makes me kind of pleased – I used to watch it way back in the mid-nineties when I first moved to Bristol, and was living in a house with six other people – none of them were my friends, and I ended up extremely lonely, so daytime tv was my weekend entertainment for a few months… and those early Rugrats were great. 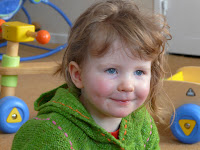 At the same time that’s kind of bizarre… at what point did it cross over so a 20-something me and a 2 year old H appreciates the same thing from different angles? What exactly is going on?

Anyway, I took lots of photos of H today, as Snapfish are doing their 99 photos for 99p deal (check the Mum Friendly Facebook Group for details), and I like this one, though I wont get a print of it as she’s so obviously full of cold.

This site uses Akismet to reduce spam. Learn how your comment data is processed.